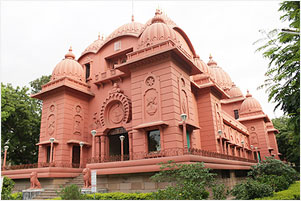 
The service offered by the Ashrama may be broadly summarized as follows.

The Ashrama has a big imposing Universal Shri Ramakrishna Temple built in 1979 where regular Puja, Path, Arti, Prayer, occasional special Pujas and Havans etc. are conducted. The Temple provides an opportunity to people of all denominations to take part in meditation, bhajan, religious discourses, prayers and celebrations of the great men of different faiths.

Regular religious discourses are held usually every Sunday, Wednesday and Saturday. Spiritual Retreats for students, teachers and general public are held almost every month since 1991. The Monks also go to preach the lofty cultural, religious and spiritual ideas of the nation to the people. The places which are covered by such lecture-tours are Ahmedabad, Gandhinagar, Anand,  Vadodara, Jhagadia, Jamnagar, Junagadh, Bhavnagar, Porbandar, Bhuj, Mithapur, Dabhou, Dahod, Limbdi etc. Throughout the years under review large number of Swamis, devotees and friends participated in the functions of the Ashrama.

During their stay devotees and religious seekers got a rare opportunity to listen to their talks, discourses and also receive their blessings and guidance in spiritual life.

Of the Ashrama has so far brought out the books of Ramakrishna- Vivekananda literature for the Gujarati reading public. Eighty four books were reprinted and sixteen new titles were printed during the period.

Medical Services froms an important part of the activities of the Ashrama. Free outdoor Homeopathic and Ayurvedic Dispensaries serve the people of the city, especially its poorer section. Both the dispensaries are located within the Ashrama compound situated in the heart of the city. Vaidyaraj Shri Bhikhubhai Trivedi and Dr T. Khira are working in the Ayurvedic Section and Dr. B.N.Thakar in Homeopathic section.

accommodating school boys is run on the Gurukul system. They are admitted without any distinction of colour and creed. They live as brothers using neat uniforms. of the boys are taken from the villages. Care is taken for their a round development-physical, intellectual, moral and spiritual. Training in self-help and discipline form the essential features of the home Many meritorious but poor students are also maintained free or part-free. Stipends are awarded on the merit of the case without any reference to community. Various constructive programmes keep the bubbling energy of the young boys channelised in the right direction of 'Character Building', 'Man-Making and' Assimilation of ideas' towards bringing them up as worthy citizens.

The Ashrama has a well furnished library and reading room for the benefit of the local public. Both are growing all round from year to year.

Annual Competitions for Students and Youths

Swami Vivekananda Centenary Memorial Essay, Elocution, Recitation Competition and Swami Vivekananda Vichar Prachar  Exam for Schools, Colleges and University Students are held every year as a Special feature drawing the attention of the students and youths of the moral and religious values of life. Since 1993-94 various new competitions like story-telling, fancy dress (depicting saints, prophets, gods-god esses of various religion), quiz, drawing etc. were introduced. Attractive prizes were given to the winners. 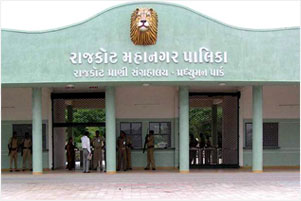 Pradyuman Zoo Rajkot is very famous in Rajkot City. An old zoo known as a Aji Zoo was situate in 1992, , public park area well-known as Pandit Din Dayal Upadhyay Park near Aji dam on Bhavnagar road by Municipal Corporation of Rajkot. A new recent Zoological park in an area known “Pradyuman Park”located 2 KM away from the Aji Zoo.

There are many people to visit this Pradyuman Zoological Park in Rajkot and during vacation time many people come in this famous park.

Pradyuman Zoo Rajkot opened by Rajkot Municipal Corporation which is open in Swarnim Gujarat celebration year. Pradyuman Park is spread in 137-acre of area. On an average, 1,000 People are expected to visit the park each day. Rajkot’s older Aaji zoo’s wild-animals are shifted to new Pradyuman Garden. Pradyuman Park is a very beauty full place. Pradyuma Park is a one type of Picnic Place. 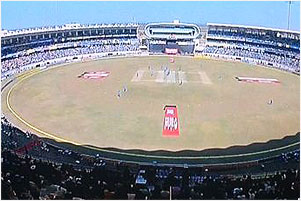 The stadium, which hosted its first international match on January 11, 2013 between India and England, is one of the finest cricket stadiums in the country. Players, former greats, officials and spectators whoever have been to the stadium have fallen in love with it. The SCA stadium, spread across sprawling 30 acres of land and built at a cost of Rs 75 crore, has in fact fulfilled a long-standing need for a world class stadium in the region.

Before the inauguration of the SCA Stadium on Jan 11, all international matches were played at the Rajkot Municipal Corporation ground on Race Course Road. It was a temporary set-up with limited facilities for players, spectators and media persons. The new structure address all these needs and more. In fact, former BCCI vice president and SCA general secretary Niranjan Shah himself has done all the planning and tried to meet all the requirements of a state-of-the-art stadium. Mr Shah has also given his inputs to the architects on what he wanted in the stadium. As someone who has travelled the world and seen different venues across the globe, Shah knew exactly what he wanted in building what he calls "his dream stadium".

"It was my dream to build a world class stadium here and now when I see that dream coming true, I feel really happy," Shah had said when the stadium was nearing completion. The stadium has today given all youngsters growing in the region an opportunity to play and progress in a world class venue. The training facilities, gymnasium, outside nets etc are all world class. In a competitive world of cricket today, these small small things will help them mature into better cricketer sooner than expected.

The stadium has a sitting capacity of 28,000 with 60 corporate boxes. These corporate boxes has a capacity of 15 people in each boxes. For security reasons, all the players and match officials have been accommodated in one sitting area. But the USP of the stadium, however, remains to be the open space all around the stadium.

The dressing rooms are huge, bigger than most of the stadiums in the world. Lot of open space has been provided in the hospitality area and proper attention has been given to the sanitary aspects as well. A lot of effort has been made to make the stadium spectator friendly. There are no fences between the spectators and the playing area. The first row of seats are also placed at a height of 6 feet to give enough space all around the stadium for commercial usage. 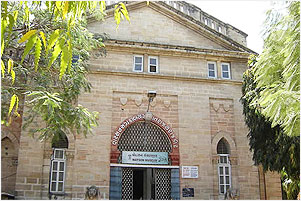 The Watson Museum in Rajkot, India is a museum of human history and culture. Its collections precious objects of colonial period of India and History of Rajkot. It is amongst the largest and most comprehensive museum in State of Gujarat. Watson Museum is considered to be the finest amongst 7 such museums located across Saurashtra (region) and run by the State Government because it holds invaluable articles and state-of-the-art facilities like photography, guide service, reference library and sales counter of the museum's publication.

The museum is set up in the Queen Victoria memorial institute buildings located in Jubilee Garden, Rajkot. The Watson Museum was named in fond memory of Colonel John Watson in 1888. Colonel John Watson was political agent of Kathiawar Agency form 1881 to 1889. Watson Museum is the second most important museum in Gujarat, after the Museum of Baroda and is the oldest museum in Saurashtra (region). Colonel Watson was fond of his history and archeology and used to collect information on Rajkot. Most of his collections and other artifacts are preserved here. The museum building was completed in 1893, when it opened to the public by Governor Lord George Harris of Bombay Presidency.

While the museum's archeology gallery also boasts of artifacts of prehistoric period and the Harappan civilization in the archeology gallery, a treasure of sculptures belonging to erstwhile Ghumali - a capital of Jethwa - grace the sculpture gallery.

Nest Service Apartment is pioneers in this segment offering some of the finest service apartments in Rajkot, Gujarat, India. We offer safe, secure and economical Serviced apartments / accommodations in Yagnik Road, Rajkot, be it for work or for pleasure. Service Apartments are fast emerging as preferred choices of long-stay executives, NRI's and other frequent travelers. They offer all the conveniences of a hotel with the privacy and warmth of home. Whether you are a business traveler or holiday maker looking for more than just a regular hotel room, a serviced apartment is the answer. Giving you more space, more privacy and at a cheaper rate, most of our Service Apartments are available from one night to one year. We provide best service apartment in Rajkot, Gujarat, India.